Free Shipping in India on orders above Rs 1000 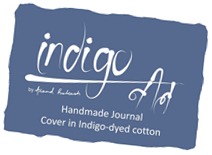 come to fruition. The fabric caught my eye at one of the craft melas that I was visiting and this was about two years back. Since then I have been waiting for the right time to launch them. The journals were made about a year back but did not see the light of day because of the lack of inspiration on the packaging, branding and story part. Indigo has such a chequered history

that it would not do justice to launch them without the essence or story behind it. I looked for information across a variety of mediums and the best written piece was by Brinda Suri, she has beautifully written the below article. This write-up is also packaged along with the journal in the form of a small booklet so that all of us who love Indigo can also treasure a part of its history. I have stayed natural with jute thread tassels and obviously it comes with my signature peacock bookmark in brass metal. Sometimes the story behind a product/design is much more stronger than the product itself. I have tried my best to do justice to it. I hope you enjoy the limited edition journals.

Origin and role in Indian freedom movement
Indian expertise in preparation of vegetable dyes goes back over a thousand years, with excavations revealing strands of dyed fabric belonging to the Indus Valley Civilization.

According to D. Balasubramanian in his article ‘Indigo nation: Champaran to Chandigarh’ in The Hindu, “Further proof comes from the paintings in the Ajanta Caves, as well as from the writing in Kautilya’s Artha Sastra, which refers to dyes and their uses. Eighth century Central Asia and Egypt knew of Indian textiles. Marco Polo, who travelled through India in the13th century, was the first to report on the preparations of indigo dye in the country. Indigo was known to, and used by, ancient Greeks and Romans, as a pigment in paintings. It is very likely, however, that the name Indigo, attributing its association with India, came after Marco Polo’s report.”

A few centuries ago, the only source of blue was indigo. It was abundantly available in America, which had been colonized by handful European nations, who had monopolized the trade. Post American independence India was found ideal for indigo and Europeans colonizers, particularly British, set up units in indigo-friendly areas in Bengal and Bihar. Its trade was a profitable venture and as British rule spread its tentacles, thousands of farmers were forced to grow indigo in place of food crops.

Indigo was also purchased at a low price from them which lead to extreme poverty. Meanwhile by the end of the 19th century, chemical indigo had been manufactured in Germany and the requirement of Indian indigo fell, worsening the conditions of farmers who began getting even lesser returns but had to continue with the crop. During the 1920s famine spread in Bihar, and to boost economy the British levied taxes on the already debt-ridden indigo belt which lead to rebellions in the state, the most famous being the riots in Champaran district. Mahatma Gandhi was called to witness the conditions of indigo farmers and it was from Champaran between 1918-19 that he held his first satyagraha, a movement that was to finally help India win her freedom.

Colour spectrum
Indigo is one of the most versatile colours. People usually associate indigo with blue but essentially indigo can run between the spectrum of very light blue to deep green. With alum it gets grayish blue, harad (or Black myroblan, the widely-used digestive herb that’s also interestingly known in Sanskrit as Haritaki, meaning originating in God’s home) makes it go green and copper sulphate turns it deep blue. It is one of the most exciting colours and can bring in unimaginable shades. A different mordant can change the complete look of the indigo. You can experiment a lot with its dyes.

Indigo has always been used with great expertise on fabric in Asia and achieved cult status in the West when Levis Strauss developed the denim jean. In central and western India the ajrakh block printers are considered masters in the art of dealing with indigo. Every handloom variant—be it kalamkari painting, weaving, Jaipuri block printing etc—uses indigo successfully in vastly different ways. Being a hard-sourced natural dye an indigo outfit on the shelf always has a higher mark up as compared to other vegetable colours.

Extraction process
The indigo plant is a biennial, bearing yellow flowers and bluish leaves. Known as Indigofera Tinctoria or Nila in India, it has a higher indigo content as compared to its variants across the world. To extract the colour,

the leaves are crushed into a paste and undergo a series of fermentation and oxidation processes before the dye is obtained. The technology in India, says D. Balasubramanian, was handed down from fathers to sons over the centuries. “In a nation full of castes and communities, each specializing in one art, craft or technology, it was the Kurmis of Bihar and UP, the Kumbis of Maratha and Deccan, the Niralis of Central India, and certain groups of Muslim dyers who have been exponents of this form of medieval biotechnology,” he elucidates.

There are a number of ways of extracting the dye.

The common method used these days takes the following route. The first stage involves preparing the all-important indigo vat for which the water is warmed to about 20-25C and caustic soda stirred into it. Upon it being mixed well hydros is sprinkled and stirred slowly. Immediately after, indigo grain is added in small quantity and also stirred very gently in order to let no bubbles appear on the surface. Once it dissolves well the container needs to be sealed tight with a lid. Depending upon the quantity of the liquid the mixture is left to stand and get dissolved. When the surface reflects a greenish hue it’s an 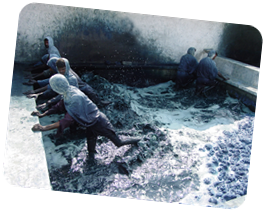 indication that the process has been successfully completed.

The next step is dyeing for which pre-washed fabric or yarn treated in a mordant (which helps in holding-fast the dyes) is taken and fully submerged in the vat and vigorously moved in it. It is then allowed to remain dipped for a few minutes after which it is removed from the vat and squeezed. At this stage the dyed fabric/yarn looks like an unattractive clump of black but magically on exposure to air as the indigo begins to get oxidized the black turns blue. If the final colour emerges as being too faded the process of dyeing is repeated to ensure the required shade is obtained, upon which the fabric/yarn is rinsed in cold water and then given a quick warm bath in detergent and hung to dry.

Picture of men performing one of the steps of the ancient process of extracting indigo dye from the Indigofera Tinctoria plant. Here they are stirring the indoxyl-rich mixture to mix it with air. This allows the air to oxidize the indigo plants, which settles to the bottom of the tank.

The write-up was contributed by Brinda Suri www.brindasuri.blogspot.com

Subscribe to get updates about product launches, special offers and news.